Gold has served as a symbol of wealth and a means to store value throughout history and has been an integral part of business and trade from the times of ancient Egypt. Throughout the world Gold coins are regarded as the most valuable and desirable. Gold United States coins are also among the most desired and respected in the world, as many are comparatively rare due to approximately 90% of all U.S. gold coins being reclaimed and melted by the U.S. government in the 1930’s. 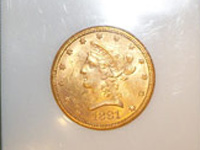 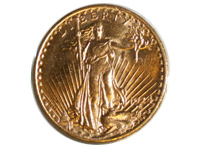 Minted from 1907‐1933, the Saint‐Gaudens twenty‐dollar gold pieces are considered by many to be the most beautiful U.S. coin ever minted. Augustus Saint‐Gaudens was an eminent sculptor tasked by President Roosevelt to re‐design U.S. coinage to better reflect the country’s beauty and power. These coins are among the most sought‐after U.S. Gold coins in the world. 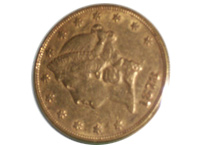 The type 3 Liberty Head Twenty-Dollar gold coins were minted from 1877-1907, and featured “Twenty Dollars” spelled out. Uncirculated specimens of these coins today are very rare.

The Liberty Head Eagles featured the motto above the eagle from 1866‐1907. The coin is in Extremely Fine condition and comes enclosed in protective acrylic capsule and black velvet display box.

The Liberty Head Eagles featured the motto above the eagle from 1866‐1907. The coin is in Extremely Fine condition and comes enclosed in protective acrylic capsule and black velvet display box.

The Half Eagle was the first gold coin struck for the United States. The variety 2 coins, with the motto above the eagle, were struck from 1866‐1908. The coin is in Extremely Fine condition and comes complete in protective acrylic capsule and black velvet box.

The Indian Head Half Eagle is known for its unique sunken‐relief design, which was very unique for United States coins. The coin is in Extremely Fine condition and comes complete in protective acrylic capsule and black velvetbox.

Silver Coins also have their roots in ancient times. Cherished by both the serious and casual coin collector, silver coins are a symbol of wealth, value and history. Silver is unique in that it is a precious metal but is still reasonably affordable, making it possible for everyone to collect and appreciate fine silver coins. We offer each individually, as well as better graded coins from professional grading services such as PGCS and NGC. Each of these silver coins can be packaged in many configurations appealing to a wide variety of people.

Morgan Dollars are among the most popular U.S. silver coins, with most being minted during the second half of the 19th century, the American Old West or “Wild West”. The coins were born from the 1878 Bland‐Allison act, requiring the government to purchase large amounts of silver from U.S. miners and mint legal‐tender coins. Designed by George T. Morgan, the dollars were minted from 1878 to 1904 and again for one more year in 1921. The coins are very popular due to their large size, historical significance, and precious metal content. Many of the dollars come from the famous Comstock lode of Nevada, first discovered in the late 1850’s. 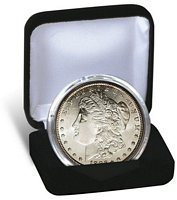 The Peace Silver Dollar was first struck in 1921 to commemorate world peace. The Pittman Act of 1918 resulted in millions of Morgan Silver dollars being melted to pay for World War One. An additional provision of the Act was that after the war, silver dollars were to be again minted. In 1921, the Peace Dollar was designed and struck. These were the last large silver dollars minted for circulation and production ceased after 1935. 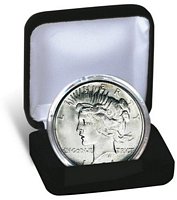 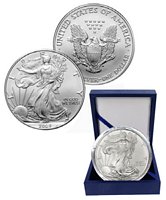 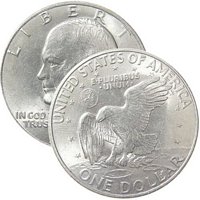 The Eisenhower Dollar was minted by the U.S. Mint to honor both President Dwight David Eisenhower, and the first landing of man on the moon. Comes complete with protective acrylic capsule and black velvet presentation box.

This unique half dollar, authorized for mintage in 1792, was one of the first coins produced by the United State Mint. With a mintage of fewer than 300,000, it is likely that less than 5,000 exist today. In Good condition and complete in protective capsule and black velvet display box. 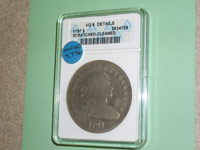 One of the earliest U.S. Dollar Coins! With a very low mintage of 7,776 over 200 years ago, it is likely less than 500 remain today. Coin enclosed in protective slab and certified by ANACS, #2934729, to be in very good condition.